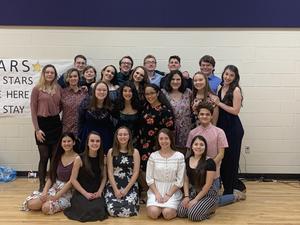 Come and see our amazing BETC students at the upcoming performance of We Happy Few on Thursday, April 2nd at 7 PM in BHS Auditorium. The performance is free!!

The Burnet Ensemble Theatre Company (BETC) has been hard at work preparing for the District One Act Play Competition.  This year the students will be performing, We Happy Few by Imogen Stubbs.  The play tells the true story of the Osiris Players who were an all female traveling group in England whose aim was to take plays of Shakespeare and other dramatists to the districts untouched by other companies.  During the Second World War, a total of 1500 performances were given, to children in daytime and adults by night. BETC aimed to tell the story of this incredible group and have done so remarkably well. The students competed at District on March 3, 2020 and were wonderful representations of Spirit, Pride, and Honor.  You can see these students hard work at the upcoming performance of We Happy Few on Thursday, April 2nd at 7 PM in BHS Auditorium.  The performance is free!! We hope to see you there!