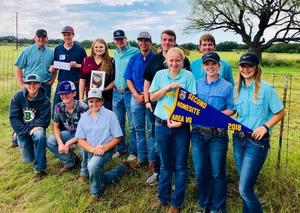 The Burnet FFA Land, Range and Homesite teams competed at the Area 7
Fall CDE this week in Blanco, Texas. We are super proud of all of these students and their efforts. They have worked extremely hard this Fall and it paid off for them. All three teams went up against some tough competition. The Land and Homesite teams are both new teams added this year.
The Land team showed improvement throughout the Fall, but came upshort of qualifying for the State contest. They placed 10th as a teamand were represented by Jacob Robinett, Ethan Floyd and Neil Denton.Jacob Robinett placed 10th individually against a tough field ofcompetition.The Homesite team continued to show improvement by beating their bestteam score by 70 points. This team is comprised of Ashton Floyd, AxyHorner, Tyler Patterson, Caroline Wideman and Cash Spivey. They placed2nd as a team and will represent Burnet FFA at the State contest heldin April at Tarleton State University. Axy Horner placed 3rd overall,followed by Ashton Floyd who placed 7th as an individual. Cash Spiveyplaced 3rd individually in the alternates division.The Range team turned in their highest score to date by a largemargin. This team includes Marc Barnett, Katelyn Moore, Kaden Sanders,Greyson Barnett and Ryan Edmondson. They placed 1st overall as a teamand also qualified for the State contest to be held at Tarleton inApril. Marc Barnett placed 1st as an individual and was awarded a$3000 scholarship for his efforts. Katelyn Moore placed 2nd as anindividual. Kaden Sanders placed 4th overall, but 2nd behind Marc inthe Senior division and was awarded a $2000 scholarship. RyanEdmondson placed 2nd as an individual in the alternate division. (OnlySeniors are eligible for scholarship prizes)They will take a short break until the Spring and then will be back inthe pursuit of excellence. Please congratulate these amazing studentsas you see them! They deserve it!